For years, China has maintained its status as one of the world’s top polluters. Chinese cities are among the world’s most polluted, partially due to the rapid industrialization that has occurred in China over the last five decades. The province of Hebei Is china’s center of pollution. Seven of the ten most polluted cities in China are found in the province.

Chinese leaders face the difficult choice of prioritizing either economic growth or environmental and social welfare. For the past several years, Beijing has made a concerted effort to reduce high concentrations of air pollution across China. Once the world’s poster child for urban air pollution. According to the report of AirVisual World most polluted cities 2018 (PM2.5), the average concentrations of pollutants fell in Chinese cities by 12% from 2017 to 2018, while the capital Beijing has fallen out of the top 100 most polluted cities following concerted efforts to get air pollution under control.

From an environmental perspective, it is a good news, but this development has an enormous impact on China sourcing. Entire industrial regions of China are being temporarily shut down, and the unusual sight of blue skies is reappearing as environmental inspectors go about their work. After decades of doing little about the pollution that has plagued much of the country, China’s government may be finally getting serious about enforcing its environmental laws. 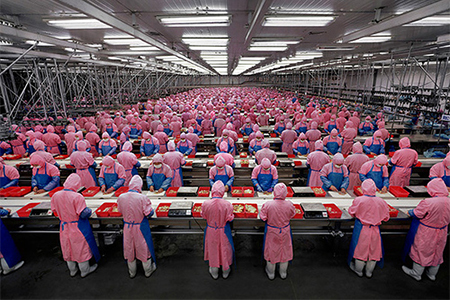 According to the Ministry of Ecology and Environment, businesses are also the focus of the increased air pollution inspections. Affected sectors include those engaged in production activities labeled “environmentally impactful,” such as die-casting, painting, and printing, in addition to textiles, rubber, leather, chemicals, carbon, metal coating, and plastics. You can expect to be “hit the hardest” if your business falls within the following sectors:

China is stepping up inspections and punishments for noncompliant businesses. But officials are also increasing incentives for companies that reduce pollution. According to ecovadis, more than 30,000 business have been penalized during a major campaign against environmental violations in China with companies worldwide feeling the impact.

Within the textile industry in China, companies have found themselves in the environmental spotlight as well. As the world’s largest producer of textiles, the industry has historically been one of the worst polluters in terms of carbon emissions and water pollution.

It would be wrong to think that the Chinese government will completely shut down all the industry in order to protect environment. What the Chinese authorities are trying to do is to achieve an effective co-existence of industry and environment. In a blog post published in the China Briefing it is said “As China grapples with a stagnating economy, more provincial governments are choosing to incentivize rather than penalize businesses to cut down on their pollution. One such example is the province of Hebei, which recently introduced a new ‘pace setter’ scheme to give leading enterprises preferential treatment and exclusion from output restrictions lists.”

Expansion of industry is essential for economic growth. China is trying to seek less-polluting ways of sourcing and processing these raw materials.